Alcohol Poisoning: What you Need to Know for the ABIM and USMLE exams

If most of your clinic duties are in primary care, you may only rarely encounter alcohol poisoning. However, this topic is a favorite of the boards in the Nephrology section and one that does certainly arise in emergency departments and on the inpatient wards. For the USMLE and ABIM examinations, it is important to know the specifics of alcohol poisoning, including how to differentiate among Ethanol, Methanol, Isopropyl alcohol, and Ethylene glycol. In fact, in a patient suspected of having consumed too much alcohol, these will be the answer choices rather than simply “alcohol poisoning.” So how do we arrive at the correct diagnosis? First of all, you won’t be able to consider alcohol poisoning without first calculating an osmolal gap, the difference between the measured (seen on labs) and the calculated osmolality. The former is seen on the lab value list provided in the clinical vignette; the latter is determined by the following equation: Plasma Osmolality = 2 x serum [Na+] + [BUN]/2.8 + [Glucose]/18 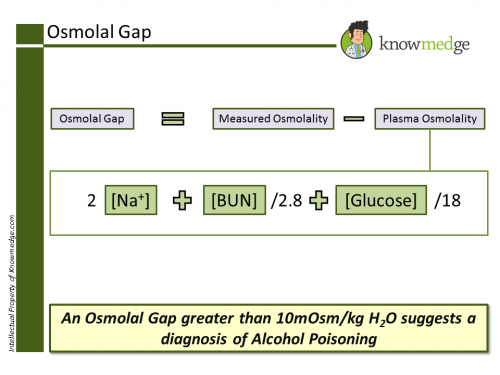 A normal osmolal gap is 10mosm/kg H2O. A larger than 10mosm/kg H2O value suggests that the unmeasured osmoles is attributable to an alcohol. Now, how do we differentiate the different types of alcohol? Using a few simple clinical clues… 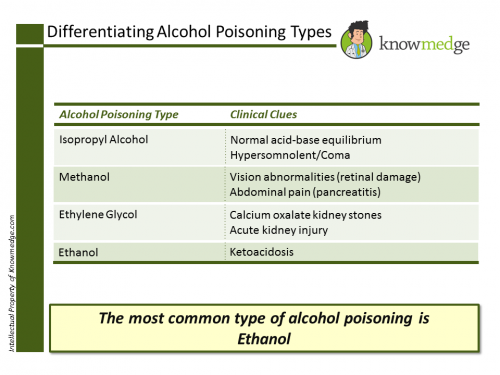 The ABIM and USMLE exams are known for testing both the diagnosis and treatment of various conditions. Alcohol poisoning is no different. You will either be asked what the most likely diagnosis is in a patient with an overdose of some type or what the best next step is in his or her management. 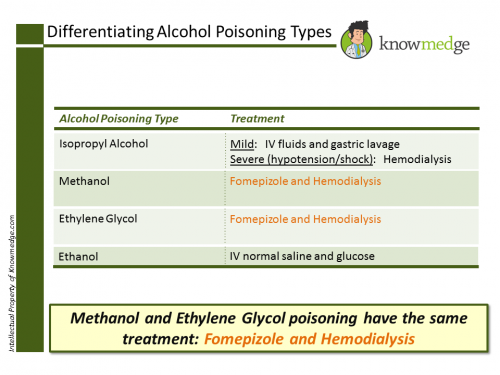 Isopropyl alcohol treatment is dependent on the intensity. Methanol and Ethylene glycol have similar treatment (isn’t that nice?): Ethanol poisoning has the most basic management: IV fluids including glucose. Now, that you’ve reviewed alcohol poisoning for the ABIM and USMLE boards, let’s give you all the info in one simple Knowmedge visual. 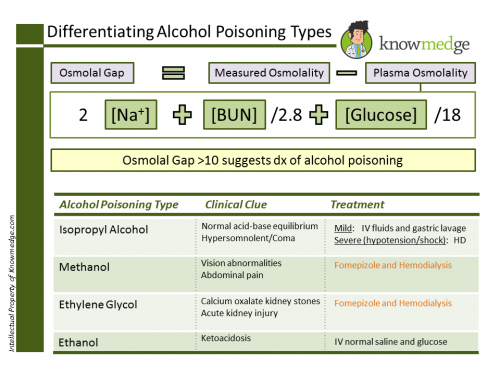 Thanks in advance for sharing your thoughts below if you have additional tips for the other users in the Knowmedge community.