It wasn’t a Streptococcal infection; it wasn’t allergies; it wasn’t pollutant irritants. Nope, the cause of the President Barack Obama’s persistent sore throat was gastroesophageal reflux disease (GERD).

On Saturday, December 6, Obama underwent a laryngoscopic procedure to work up the sore throat that had been nagging him for “the past couple weeks” according to a statement by Obama’s PCP Dr. Ronny Jackson of the Navy.  When the study showed soft tissue swelling, a follow-up CT scan was ordered and was found to be normal.  Keep in mind that this extensive work-up that Obama received is not typically what is ordered for non-presidential patients. The president’s physician acknowledged the discrepancy in the president’s workup and that which most patients undergo, but added that it was, as reported by White House press secretary Josh Earnest, “the next prudent step.”  In the end, Dr. Jackson concluded “The President’s symptoms are consistent with soft tissue inflammation related to acid reflux and will be treated accordingly.” Unlike the waiting times for the rest of us, ABC News noted, “It was a quick visit: Obama’s motorcade pulled out of the Walter Reed parking lot fewer than 30 minutes after it pulled in.” No word on if Obama picked up a proton pump inhibitor from the pharmacy on the way back to the White House or if he’s just going to focus on lifestyle modifications. Below, in true Knowmedge fashion is what you need to know about GERD as you prepare for your Internal Medicine shelf, USMLE or ABIM exams. What are the presenting symptoms of GERD? By far, the most common symptoms of GERD are heartburn and acid regurgitation. In fact, they post specificity and sensitivity of nearly 80%. Less common symptoms include sore throat (as in Obama’s case), dysphagia, bloating, early satiety, globus, or halitosis (bad breath). What are the triggering factors for GERD? Overeating, alcohol use, smoking, citrus, fatty food, spicy foods, mints, tea, and coffee. Among medications, calcium channel blockers are most commonly implicated. Stress can also cause acid reflux, as one media outlet noted, “In toxic political season, Barack Obama diagnosed with acid reflux”.  When Obama visits India late next month, his hosts will want to avoid serving any spicy dishes (commonly experienced in Indian cuisine) that could exacerbate his GERD. How do you diagnose GERD? Although Obama underwent an invasive workup, usually GERD is diagnosed clinically by symptoms. An empiric trial of a proton pump inhibitor (PPI) can be undertaken for diagnostic purposes as well. Ambulatory esophageal pH monitoring is the most accurate means to confirm the diagnosis of GERD but rarely performed initially without first recommending lifestyle modification or PI trial. Is there any notable difference between one PPI and another? There are five PPIs available in the US: Omeprazole (Prilosec), Esomeprazole (Nexium), Lansoprazole (Prevacid), Pantoprazole (Protonix) and Rabeprazole (AcipHex). Marketing differences aside, studies show them all to have similar efficacy. Dosing is typically once daily 30 minutes before breakfast. If symptoms persist, twice-daily dosing with the second dose before dinner can be used. What if the PPI trial is ineffective? Endoscopy can be performed in patients who don’t respond to empiric PPI therapy to look for reflux-induced esophagitis or Barrett esophagus. Ambulatory esophageal pH monitoring is most commonly ordered when we wish to confirm GERD in patients who have persistent symptoms despite being on maximal medical therapy with a normal endoscopy. As mentioned above, this procedure, which entails placing a pH probe in the distal esophagus and monitoring the pH for an entire day, is the most accurate method of confirming a diagnosis of GERD. What if the patient has “alarm symptoms”? Alarm—or red flag—symptoms include: anemia, vomiting, weight loss, and/or dysphagia. Having any of these is suggestive of complications from GERD. Therefore, endoscopy is undertaken in such patients. How is GERD treated? First and foremost, lifestyle modifications should be employed to remove reversible risk factors. For patients who smoke, tobacco cessation is an important early intervention. Recall that the 53-year-old Obama quit smoking just prior to beginning his first term in 2008—reportedly using Nicorette gum. 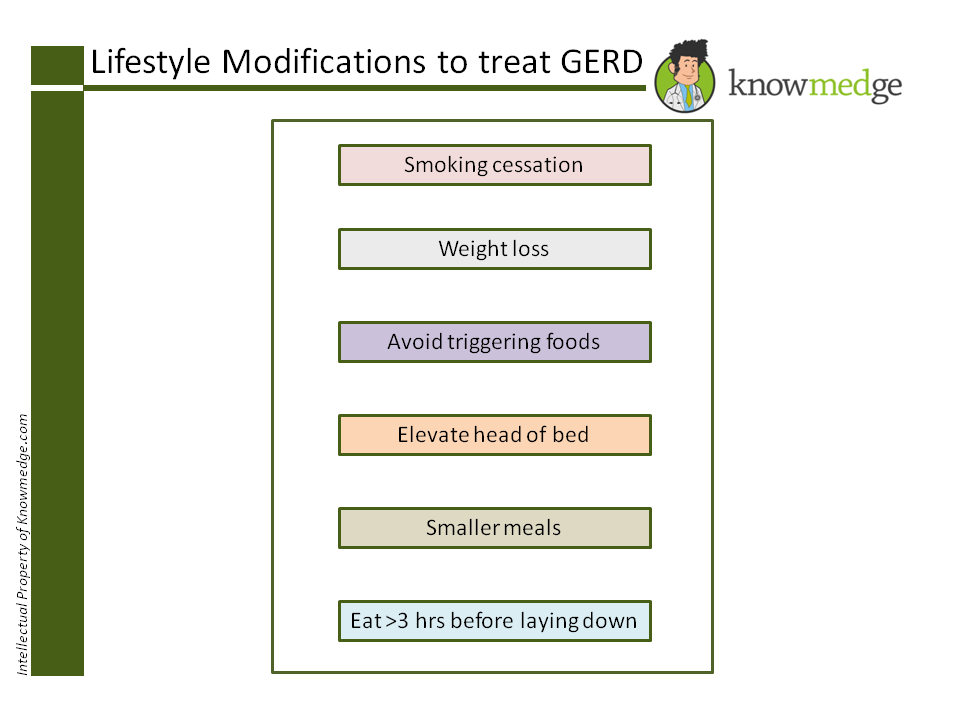 Medication therapy includes histamine H2 blockers and PPIs but the latter have been noted to be more effective symptomatically and for healing esophagitis. What are the complications of GERD? If GERD is not treated, it can lead to esophagitis, bleeding, stricture, Barrett esophagus, and adenocarcinoma. Patients should be informed that GERD is a medical condition that requires intervention. Those who have esophagitis typically receive ongoing PPI therapy. Esophageal peptic strictures should have dilatation performed and also receive ongoing PPI therapy. That’s about all you need to know about GERD as you prepare for your Internal Medicine shelf, USMLE Step, and ABIM board examinations. Oh, and the next time one of your patients is found to have GERD, you can remind them that whether they lean liberal, conservative or independent on the political spectrum, they now have something in common with President Obama. See previous ABIM Board Exam disease profiles here.