Just in time for Knowmedge’s ABIM Neurology Week, the makers of one of the most widely used headache pain relievers, made an important announcement late last week. 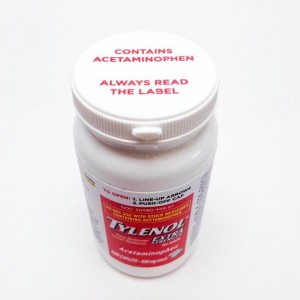 The familiar Tylenol bottles lining the analgesia and cold/flu aisles of your local pharmacy are about to get a significant facelift. Johnson & Johnson (the manufacturer of the drug) announced on August 29 that it will add text to the bottle cap of Extra Strength (500mg tablets) Tylenol stating “CONTAINS ACETAMINOPHEN”. The change will take place beginning in October and packages containing lesser doses will follow in the coming months. On the surface, this seems as redundant as a bag of peanuts stating “CONTAINS PEANUTS.” However, there’s good reason to include such an explicit warning. After all, acetaminophen toxicity is the most common cause of acute liver failure in the United States. Consuming more than 12 grams of acetaminophen at one time can lead to fatal hepatic necrosis. However, in the setting of alcohol consumption or malnourishment (or both) the amount needed to cause liver damage drops. Thus, the maximum recommended daily dose for all users is 4 grams. 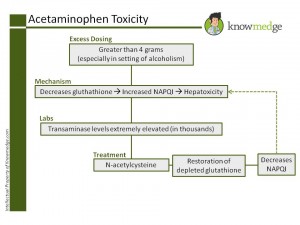 At high doses, acetaminophen decreases the levels of glutathione causing an increase in a metabolite called NAPQI (N-acetyl-p-benzoquinonimine) as shown in the Knowmedge image above. It is this metabolite that exerts the toxic effect on the liver. Transaminase levels with acetaminophen toxicity can be extremely elevated (in the thousands). Treatment is N-acetylcysteine, which restores the depleted glutathione levels leading to a decrease of the NAPQI metabolite. Every year, some 100 million Americans use acetaminophen. Of these, nearly 80,000 people visit the emergency room secondary to acetaminophen overdose. Over 500 patients lose their lives, half of which are from suicide attempts. The other half are accidental since acetaminophen is found in over 600 products available in the pharmacy including the following popular over-the-counter meds: Patients may not realize that they are ingesting acetaminophen when they take these other medications in conjunction with Tylenol. Thus, while it’s certainly welcome news for consumers to be given the bright red-print warning on the Tylenol bottles in their drug cabinet, the logical—and perhaps even more important—next step would be for the manufacturers of the non-Tylenol acetaminophen containing medications to follow suit. Legal troubles may have prompted the prophylactic move by Johnson & Johnson. Over 85 personal injury federal lawsuits attribute liver injuries and deaths to acetaminophen overdose. Prominent bottle-top warning or not, an FDA expert panel continues to recommend that the extra-strength dose of acetaminophen be eliminated from store shelves altogether.