As we begin #GastroWeek, here is a question reviewing Gastroenterology pathology, which will be high-yield for those of you studying for the USMLE Step 1 exam. Even if you’re not preparing for that exam, give it your best shot and then see below for the answer. You’ll likely expand your Knowmedge in the process.

A middle-aged homeless man was found unconscious on the street and died shortly after admission to the hospital. The cause of death was acute liver failure. A photomicrograph of the liver at autopsy is shown below: 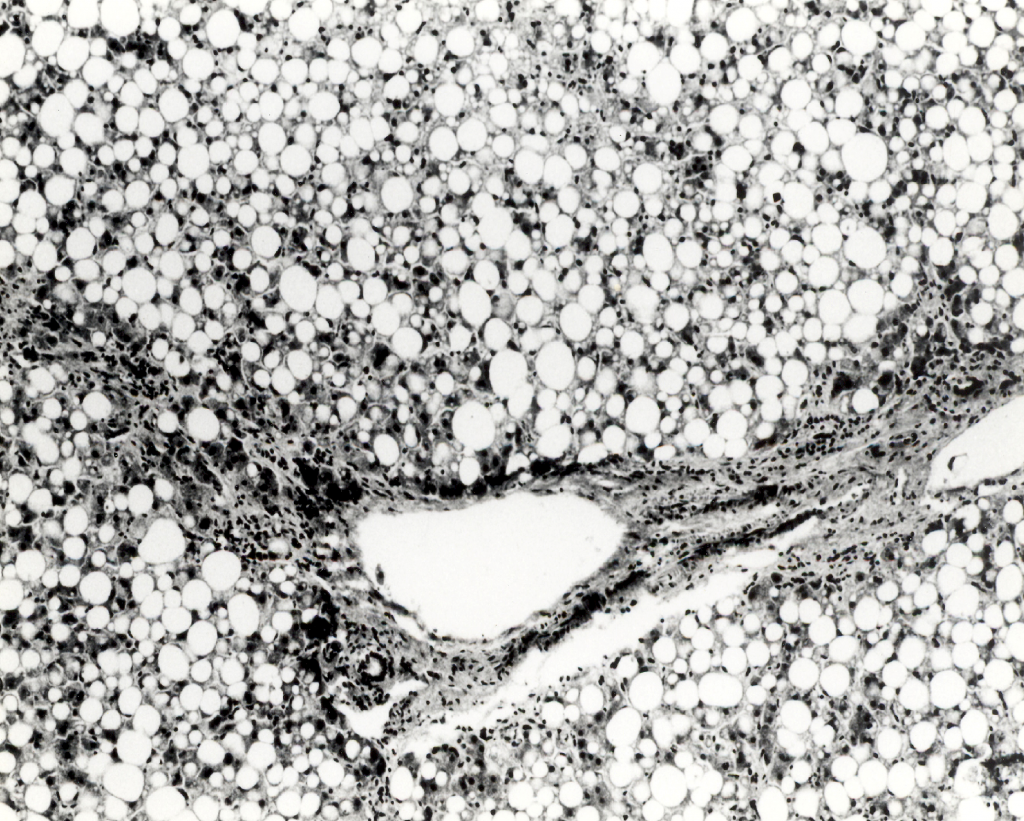 The answer is C. Fatty Degeneration. This liver is yellow and enlarged. These changes are characteristic of fatty degeneration. The lipid in hepatocytes in fatty change is mainly in the form of triglycerides. The commonest cause is ethyl alcohol poisoning. Continued excessive use of alcohol commonly leads to hepatic cirrhosis. Choice A (Cloudy swelling) is due to failure of the cellular sodium pump. This allows excess sodium to enter cells and eventually increases cellular water. Hydropic degeneration is a severe form of cloudy swelling. It occurs with hypokalemia due to vomiting or diarrhea. Potassium is drawn from cells and replaced by sodium and water in large amounts. An affected organ is increased in size and weight when its cells are affected diffusely by an adverse circumstance, e.g., by bacterial toxins or by inadequate oxygen supply. The tissues lose their normal glistening translucency and resemble boiled meat. This is cloudy swelling caused by an increase in intracellular water due to injury to the plasma membrane and mitochondria. The mitochondrial damage leads to decreased oxidative phosphorylation and ATP production. Sodium enters the cells in increased amounts and draws in water. Chiefly affected are certain highly specialized cells such as the epithelial cells of the convoluted tubules of the kidneys and hepatocytes. The kidneys and liver are somewhat enlarged and pallid. Affected cells are swollen. Fine granules and vacuoles can be seen in the cytoplasm. Nuclei are usually not affected. Electron microscopy shows swelling of mitochondria and dilation of the endoplasmic reticulum and Golgi due to accumulation of water. The cell surface becomes “blebby.” Choice D (Hydropic (vacuolar) degeneration) results from a more severe degree of water imbibition into the cell cytoplasm. It occurs in some severe bacterial infections with high fever, certain types of poisoning, and hypokalemia. In its most striking form, hydropic degeneration involves the renal tubular epithelium, but small vacuoles may develop in hepatocytes and myocardial fibrils. Translucent intracytoplasmic vacuoles, which may be so large as to push the nucleus against the plasma membrane, appear in the proximal convoluted tubular cells. The vacuoles represent great accumulations of water in the endoplasmic reticulum, Golgi, and mitochondria and, in some cases, lysosomes. Functional manifestations of cloudy swelling and hydropic degeneration are usually minimal. If the patient recovers from the underlying condition, the changes in the parenchymal cells usually disappear, and their functional capacity returns to normal. Choice C (Fatty degeneration (fatty metamorphosis, fatty change, steatosis)) is the abnormal appearance of fat within parenchymal cells. Fat vacuoles may accumulate in liver cells under either physiologic or pathologic conditions. The physiologic type of fatty liver may occur after a fatty meal. The pathologic type of fatty liver may occur as a result of poisoning by hepatotoxic agents such as ethyl alcohol, chloroform, or carbon tetrachloride, during severe infections, in prolonged anemia, and in toxemia of pregnancy. The defect in the pathologic type of fatty liver may be a reduction in the capability of the liver cells to synthesize the phospholipid or protein moiety of lipoprotein; decreased lipoprotein release from hepatocytes; or increased triglyceride production. As a consequence, lipid accumulates in the liver cells mainly in the form of triglycerides. When the liver is affected by severe fatty degeneration as in a patient with severe alcoholism, the organ is enlarged, soft, flabby and friable. The edges are rounded as a result of enlargement, and the surface is yellow and greasy. Usually the degree of dysfunction is relatively mild. In the case of nonalcoholic fatty liver disease (NAFLD), there may be progression to cirrhosis. Risk factors for NAFLD include obesity, type 2 diabetes mellitus, and hyperlipidemia. This is the first in our series of questions designed to help prepare you for the USMLE Step 1 exam. You can find additional topics and questions directly from the Knowmedge Internal Medicine ABIM Board Exam Review Questions QVault.