USPSTF updates Cholesterol screening guidelines and who should get Statins

New clinical guidelines that potentially increased the number of people who will be prescribed statins topped health headlines last week on the major outlets.

The media made it seem that there was a very high likelihood that middle-aged patients with just hypertension would be placed on a statin the next time they visited their doctor. That’s not the case.

Here’s what the latest guidelines from the United States Preventive Services Task Force (an update to the 2008 recommendations on screening for lipid disorders in adults) concluded, straight from the article in the latest issue of the Journal of American Medical Association.

In brief, a low-to-moderate intensity statin would be recommended for a patient with all of the following :

The first two cover a large number of the population in the US, especially when you consider that 70 million American adults have hypertension. However, there are much fewer who would have a 10% risk of developing cardiovascular disease within the next 10 years. In fact, one could argue that a person with such a high risk would be certain to have at least dyslipidemia, diabetes, hypertension or smoking. Therefore, it’s kind of redundant.

How do you calculate the 10-year cardiovascular disease risk?

So, how do the latest USPSTF recommendations differ from ACC/AHA cholesterol management guidelines?

Overall, these USPSTF recommendations reinforce the 2013 ACC/AHA recommendations that reduced the importance of hitting a target low-density lipoprotein (LDL) and instead determine the overall cardiovascular risk score.

We’ve detailed those recommendations before: 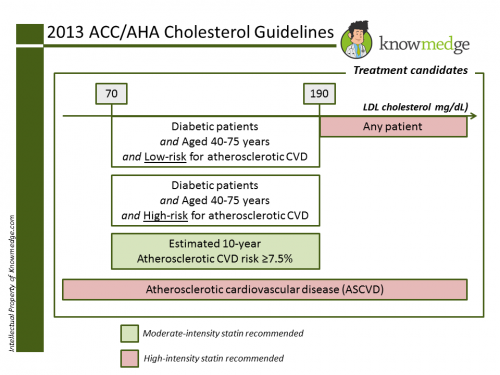 What are examples of low-to moderate intensity statins?

Low-intensity statins include the following:

Moderate-intensity statins include the following:

What about patients greater than age 75 years?

USPSTF didn’t recommend starting statins in adults greater than age 75 years (making it grade I). They may be continued in patients who are already on them.