Medicine in the Media: Tom Brokaw Diagnosed with Multiple Myeloma

Former veteran NBC News anchor Tom Brokaw revealed on Tuesday that he has multiple myeloma. The diagnosis was made last August at the Mayo Clinic and he has been receiving treatment since then while working as an NBC News special correspondent. Currently, the 74-year-old is contributing to NBC’s coverage of the Winter Olympics in Sochi, Russia. Fortunately, his physicians have been pleased with his progress, Brokaw and his employer have shared. Most of the reports in the mainstream media have described multiple myeloma as simply “cancer of the bone marrow” and spent much more time and space discussing Brokaw’s career.

Interestingly, of some of the major news organizations’ coverage—including the LA Times, CNN, Huffington Post, Reuters—the one that had the most in-depth coverage of the multiple myeloma diagnosis was USA Today, not usually known as a hub of medical content. One of my former professors at the David Geffen School of Medicine at UCLA, Hemotologist Gary Schiller MD, was quoted in multiple parts of USA Today’s article. Some highlights: Here we review Multiple Myeloma from the perspective of the ABIM, Internal Medicine shelf, and USMLE Step exams. EPIDEMIOLOGY Median age of the diagnosis of Multiple Myeloma is 70 years, placing the 74-year-old Brokaw in the prime age demographic. However, African-Americans are more commonly diagnosed with the condition than Caucasians. BACKGROUND Multiple myeloma belongs to a family of disorders known as plasma cell dyscrasias, which consist of abnormal proliferation of monoclonal plasma cells. Others in this group include: Distinguishing MGUS and Myeloma is a popular question asked by attending physicians and exams alike as the former is benign and the latter is malignant. The slide below helps to differentiate the two. Serum and urine protein electrophoresis identifies the presence or absence of an M protein spike, which is seen in Multiple Myeloma. 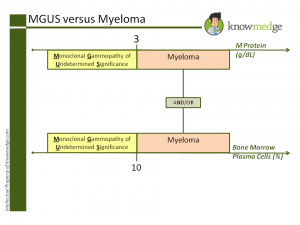 MGUS is detected only on laboratory studies and does not produce symptoms. Patients with MGUS should be monitored every 6-12 months for evidence of progression to multiple myeloma. They should also be offered bone mineral density testing for osteoporosis which can result from MGUS. SIGNS AND SYMPTOMS As the USA Today article pointed out, the classic features of multiple myeloma are remembered by the mnemonic CRAB: Calcium elevation (hypercalcemia), Renal failure, Anemia, Bone lesions. As the bone lesions are lytic in myeloma, a bone survey rather than a bone scan is ordered. If a patient meets the CRAB criteria, he or she is considered to have symptomatic myeloma. Treatment should be initiated. On the other hand, patients with asymptomatic myeloma (or those with MGUS) should not be treated. 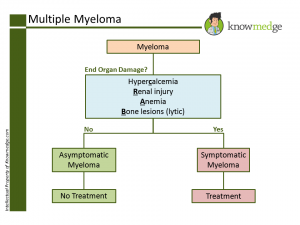